What is Push Pull ?

Push-Pull is a system of agroecological production which allows the protection of the maize against the principal pests in a tropical climate. The efficiency of the system developed by the International Centre for Research on Insects (ICIPE) in Kenya is such that it can increase up to 300% the yield of a small maize producer in tropical Africa, without the slightest use of pesticides.

The technique of Push-Pull consists in repelling (push) the pests of the field by combining repellent plants with the crop and attracting them outside the field with attractive plants (pull). The biological control of the codling moth and the armyworm in the cereals (maize, sorghum, millet, fonio) can be achieved thanks to this system. A desmodium seedling repels the pests and a row of pennisetum planted around the field attracts them and ensnares them. 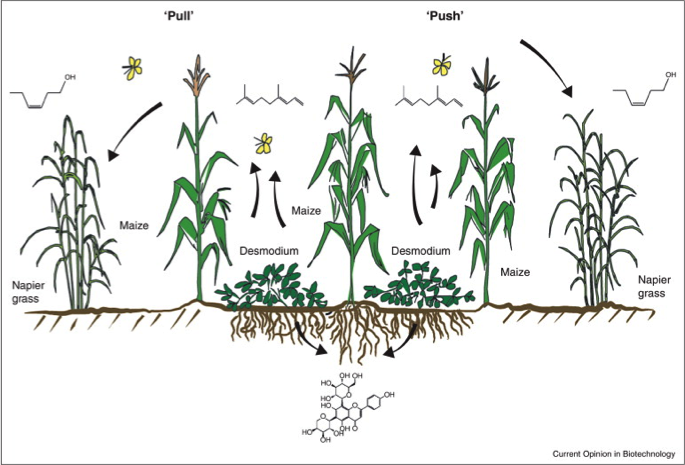 The advantages of these two species are numerous : desmodium is a legume which has the capacity to fertilise the soil by fixing the atmospheric nitrogen and pennisetum is a grass with a strong root system capable of restructuring degraded / compacted soils.

Desmodium also presents the advantage of causing a germination suicide in the seeds of the witches grass (Striga asiatica). Thus it enables the control of the damage caused by this parasitic weed and in addition to clean the soil of its seeds.

Brachiaria, a forage grass in arid zones, can be used instead of pennisetum. Its resistance to drought makes it more adapted to the implementation of a push-pull system in an arid environment.

To crown it all, desmodium, pennisetum and brachiaria constitute fodder of quality for the African cattle.

Context of the experiment

The Antenna Foundation, in partnership with the enterprise African Solar Generation (ASG) and the Institute of Agriculture in Obala (IAO), has established an AgroEcological Didactic Farm in Obala, in the centre of Cameroon, serving as a site of agricultural production, agronomic research and development and agroecological training. The objective of this farm is to produce a maximum of foodstuffs in a sustainable and persistent way on a small surface (2 ha), to permit food self-sufficiency of the farmers and to create a surplus of production for commercial purposes. The farm produces vegetables, fruits, cereals, legumes and tubers. The manure is produced on the spot (animals, compost, green manure) and the biological control of pests and illnesses is achieved thanks to a high biodiversity, trap plants, repellent and attractive, combinations between different plants, as well as natural treatments produced in-situ.

In parallel, the Energy Unit of the Antenna Foundation and its partners, of which ASG and IAO, have launched the project Clever Chicken (CC) on the same site. The aim is to test a production of chicken with ecological flesh, respectful of the animals and the environment, banning the use of antibiotics. The next step would be to go to a biological production respecting the European BIO production standards, implicating a transformation of the maize fodder  production of the suppliers in the CC project. That presents risks as much for the project as for the producers-suppliers :

It is consequently important to propose an efficient, stable and sustainable system of BIO maize production, capable of yields close to or better than the conventional ones and apt to resist the attacks of pests. The demonstration of the efficiency of such a system to producers is extremely important, in order to inspire future replications. To such end, a scientific trial of maize fodder production is in place on the site of the agroecological didactic farm at Obala. This trial will permit the comparison, in the cameroon context, of the efficiency of the Push-Pull system to conventional production and, in the event of success, the demonstration of such efficiency to producers and agronomic environments, in particular by the publication of a scientific study.

Finally, this trial will enable one to define precisely the difference of the cost between bio maize production and traditional production to propose to farmers.

The study is undertaken during 2 cycles of maize production (april-july and august-november).

The two cycles of the field survey are carried out by trainee students in agronomy (bachelor level). The students work under the supervision of the chief manager of the agroecological didactic farm. The study is overseen by the local coordinator and an agronomist manager of project of the AgroEcology Unit of the Antenna Foundation.

The trial will study the following aspects :